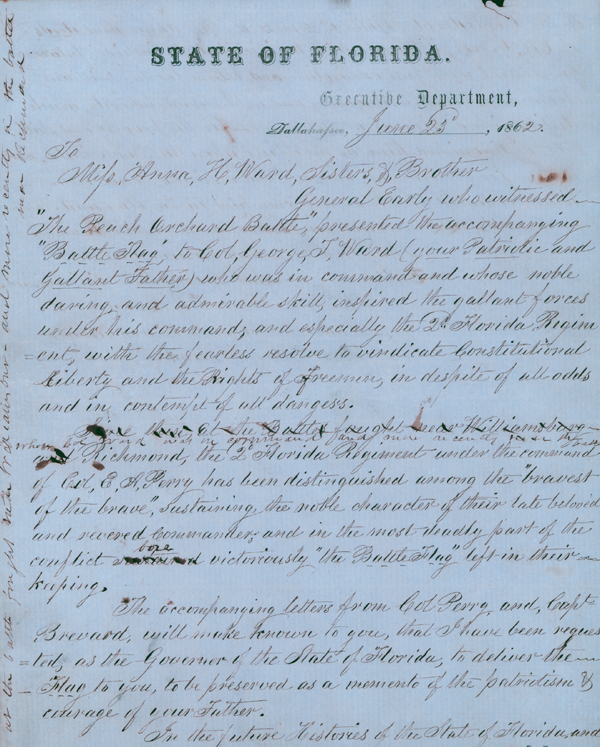 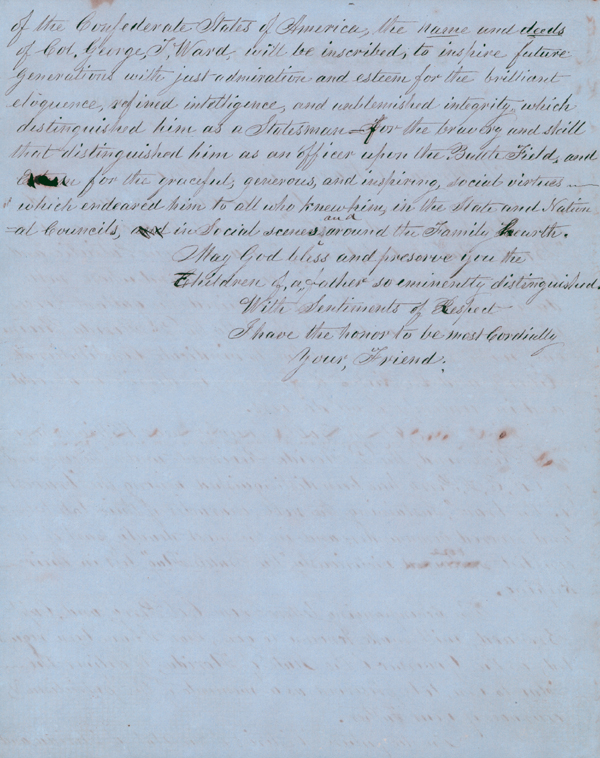 General Early who witnessed "The Peach Orchard Battle," presented the accompanying "Battle Flag," to Col. George T. Ward (your Patriotic and Gallant Father) who was in command and whose noble daring, and admirable skill, inspired the gallant forces under his command, and especially the 2d Florida Regiment, with the fearless resolve to vindicate Constitutional Liberty and the Rights of Freemen, in despite of all odds and in contempt of all dangers

At the battle fought near Williamsburg-- [part written in margin] where Col Ward was in command and more recently in the battle near Richmond, the 2d Florida Regiment under the command of col. E.A. Perry has been distinguished among the "bravest of the brave," sustaining the noble character of their late beloved and revered commander, and in the most deadly part of the conflict bore victoriously "the Battleflag" left in their keeping.

the Confederate States of America, the name and deeds of Col. George T. Ward, will be inscribed, to inspire future generations with just admiration and esteem for the brilliant eloquence, refined intelligence, and unblemished integrity, which distinguished him as a Statesman-- for the bravery and skill that distinguished him as an officer upon the Battle Field, and for the graceful, generous, and inspiring social virtues-- which endeared him to all who knew him, in the State and National Councils, in social scenes and around the Family hearth,

May God bless and preserve you the
Children of a father so eminently distinguished.
With Sentiments and Respect
I have the honor to be most Cordially
Your Friend,
[John Milton]

You can add a copyright statement or legal disclaimer in this area if necessary.
Copyright © 2002-2023 Blackboard, Inc. All rights reserved.