BE Informed • BE Involved • BE Connected 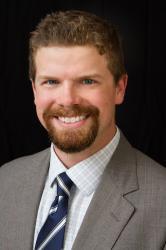 Mr. Caleb Rebarchak is the Director of Bands at Bellefonte Area High School in Bellefonte, PA. He holds two degrees from Penn State: a Bachelor of Science in Music Education and a Master of Music degree in Band/Wind Ensemble Conducting. During his time as a graduate student, Mr. Rebarchak served as the Graduate Assistant for the Penn State Athletic Bands (Blue Band, Fall Athletic Band, Pride of the Lions Pep Band) as well as an assistant conductor for all of the Concert Bands (Symphonic Wind Ensemble, Symphonic Band, Concert Band, Campus Band). He served as a Volunteer Staff instructor with the Penn State Blue Band from 2012-2017.

Outside of music, Mr. Rebarchak enjoys spending time with his family, fly fishing, being outdoors, reading, and cooking. He and his wife Amy have two children, Hannah and Isaac.

You can add a copyright statement or legal disclaimer in this area if necessary.
Copyright © 2002-2020 Blackboard, Inc. All rights reserved.